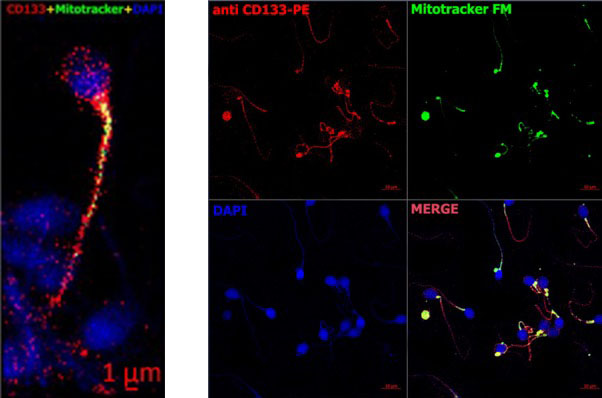 Our recent study revealed the presence of important markers that can guide the treatment of azoospermia. As known, sperm production in the testes is initiated by proliferation and differentiation of spermatogonial stem cells towards mature spermatozoa. This means that the first condition for a healthy sperm production depends on the presence of functional testicular stem cells. For this purpose, we investigated by qRT-PCR, Western blot analysis as well as immunohistochemical assays the presence of some genetic markers in testicular tissue samples to determine whether stem cell functions are normal. Expression levels were compared with testicular histology. Our results indicated that there is a significant correlation between the CD133 and CD24 gene expressions with spermatogenesis defects and they may be used as useful biomarkers in investigation of azoospermic men. CD133 and CD24 are stem cell markers locating in the testis, especially in the spermatogonia, and the localization of CD133 in healthy sperm was prominent in the tail and partly expressed in the head as observed by confocal laser scanning microscopy. Also, gene expressions of CD133 and CD24 had important fold changes compared to controls. But the most striking finding was that CD133 gene expression in the SCO group was too low at the transcriptional level to be detected. This was confirmed by protein expression and immunohistochemical assays.

Our data implied that CD133 exhibits different profiles in infertile men and thus may be considered as a candidate biomarker. Also, CD24 may be an indication of maturation arrest during sperm production. The use of these markers in the treatment protocols for spermatogenesis defects may be useful in deciding on the TESE attempts. We expect that the results reported here will lead to further studies targeting molecular pathways in spermatogenesis. Also, cell surface marker information might enable the selection of healthy cells in IVF attempts. Investigation of these markers in azoospermic men would be helpful in elucidating the mechanisms of cell differentiation with future studies and spur the development of new treatment options for infertile couples, enabling them to have children.

For the original study: Yukselten Y, Aydos OSE, Sunguroglu A, Aydos K. Investigation of CD133 and CD24 as candidate azoospermia markers and their relationship with spermatogenesis defects. Gene. 2019 Jul 20;706:211-221.